Well I guess I’ll start off saying that I should have started this months ago – five to be exact. It was one of my many New Year’s resolutions to start blogging, but I’m just now getting to it. Better late then never I guess. I’ll get to all the boring details that I’m sure you’re all dying to know about me in later posts, but for now, skipping that. Yesterday – May 16, 2010 – I ran my first full marathon! I finished the 28th Sugarloaf Marathon in 4:32.52 and I’m officially a marathoner. That’s right, a marathoner.
I can’t believe it. The only marathon I had ever participated in pre-Sugarloaf involved Law & Order re-runs on USA. Not this time. Just like Pheidippides, a soldier in 490.B.C. ran from a battlefield at the site of the town of Marathon, Greece to Athens, I ran 26.2 miles. Way easier said than done, though. After a night of essentially no sleep in which I laid in bed listening to the rain and my friend and fellow runner, Danielle, sucking on her waterbottle, I had serious doubts about this whole marathon thing. The day before didn’t really help much either – the nervous stomach cramps, lack of a race expo, 85-minute wait for dinner and serious hotel room disappointment.

Oh ya, that is me, Sarah and Danielle laying across the one-foot gap between the two pint size beds: 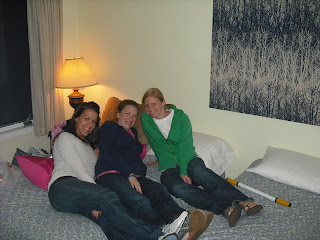 And that’s a folding chair nestled not-so-comfortably in the corner: 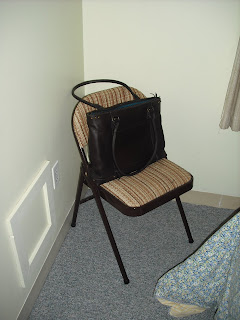 Not exactly what Danielle and I had originally planned, but you know what, we will definitely laugh about it all someday.

Don’t think I slept much, if at all, but the night eventually passed and the 4:30 a.m. alarm had us up and eating peanut butter on wheat bread. As we listened to Kesha’s ‘Tik Tok’ while we did our hair at 4:45 a.m., I remember Danielle asking me, ‘Wake up in the morning, do you feel like P.Diddy?’ Ya. No. Can’t remember how I felt, but it wasn’t like I imagine the man formerly known as ‘Puff’ feels. I kept running through all of the reasons why I thought I couldn’t run. What if my leg gets worse? (I had strained two muscles in my lower right leg about a month earlier and they were killing me. However, I did solve that with Rock Tape and lots of Icy Hot.) What if I get sick? What if I have to walk? What if I can’t finish?

All the while questioning my strength, mental stability and preparedness multiple times, we continued through the motions of the pre-marathon. Here we are in the hotel lobby waiting for the busses that left AFTER 6 a.m. despite the strict warning that ‘The bus departs at 5:45 a.m. SHARP. Stragglers will be left behind.’ Funny how that works. 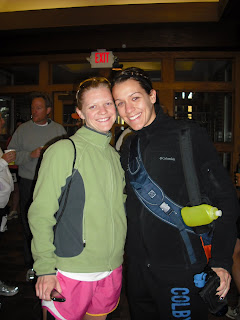 Met another first-time marathoner, Jen, here she and I are the morning of: 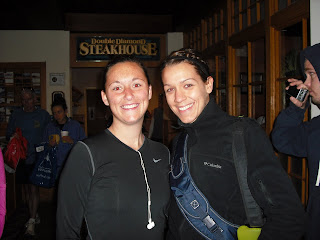 And here are three lovely ladies who ran their second marathon: Melissa, Rebecca and Danielle: 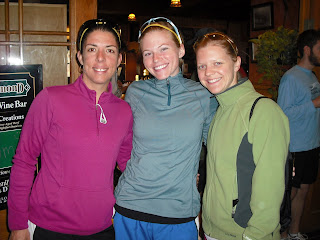 Before I knew it, we were at the starting line area stretching, applying Icy Hot once again and waiting for one of the six port-a-potties to free up. As the 7 a.m. start time approached, we packed up our bags (Danielle definitely took this to the next level and packed her headphones in the bus bound for the finish line. I believe it went like this: ‘Oh my GOD!’ followed by the fastest pre-marathon sprint ever to the bus to reclaim the beloved pink headphones. Luckily, she is pretty speedy and was successful in the retrieval.) Just as we all began to discuss our desired paces and hopeful finishing times, the starting gun went off and it was on. No more time to try and rationalize what was about to happen. Gotta thank Danielle for encouraging me to do this. She did her first marathon last October and for some reason, she thought I could run a marathon based on my minimal triathlon and running experiences. Well, glad to say she was right. No matter how frustrated I was with training she always knew I would be fine, or at least told me I would. Thanks Danielle!! 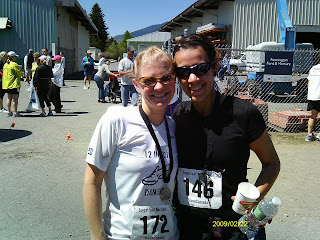 Back to the actual race. Exactly 24 hours ago (roughly 8:15 a.m.), I was at about mile eight, climbing the hills from hell. (Note: I HATE hills, especially when they are two miles long.) From reading course reports, I knew miles 5-10 were going to be pretty hill-filled, so I was semi-prepared. The next 16.2 were pretty much downhill and began with the steepest, longest quad-tearing downhill ever. Seriously, look at that picture someone took on the downhill, maybe Danielle? I don't really know who did, but you get the point.) 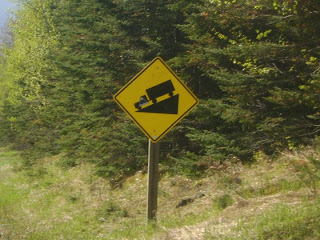 Aside from the fact that my quads were absolutely on fire, it was pretty much smooth sailing from there, or so I thought. I felt great at the half-way point. I was two hours in at mile 13 after just seeing Mom and Dad at mile 12, which gave me the extra boost I needed. 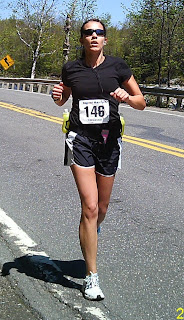 Then came mile 19. I. Hated. My. Life. I absolutely hit the wall and those last seven miles seemed to be years away. I was so hot and tired, I was counting water stops and felt sick after chocking down my lemon-lime Sport Beans. Even think I spit one out. My hydration belt was annoying me very much by this point and I actually considered tossing it on the side of the road – good thing I didn’t cause as much as I hate it, I do really love it. I tried to stay positive and focus on my goal and before I knew it, I could see the mile 25 marker. Not only was I only 1.2 miles away, but the best part was that my sister was standing there too, running shoes and all, waiting to push me to the finish line. 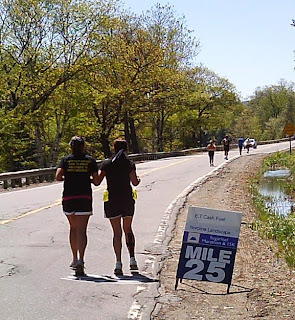 I loved having her there, it was just the distraction I needed. We even joked about how she thought I would experience ‘runner’s high’ and speed ahead of her. That definitely did not happen, but I did get to that finish line after 4 hours, 32 minutes and 52 seconds of running. 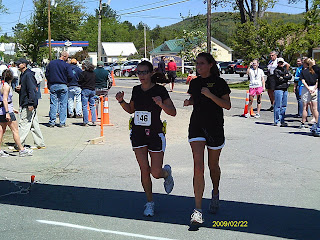 Crossing the finish was so surreal. I don’t even remember it happening, really. I remember seeing Danielle and Co. to my left and then my parents just beyond the finish line. I was so excited I didn’t think twice about throwing my arms in the air with a cup full of orange Gatorade in my hand. That just led to a sticky arm and a couple of chuckles from on-lookers. Here is everyone after the race. I love this photo! Aside from the fact that the colors look pretty all together, how good do we look? I mean really, we are all smiling after running 26.2 miles. AWESOME. 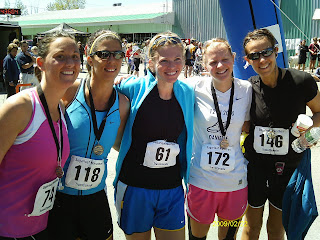 Two days before Sugarloaf, I heard Kevin Rudolf’s new song, ‘I Made It,’ and I immediately downloaded it to my marathon iPod playlist. I made sure to play it along my last mile and crossed the finish with these lyrics, “I look up to the sky and now the world is mine. I’ve known it all my life. I made it. I made it. I know that there’s no doubt, I made it.” Perfect ending to one of the best experiences of my life.

My first marathon was nowhere near just a race, though. It was truly an experience and a great one at that. I met some amazing people in those two-ish days spent up at Sugarloaf, I laughed, cried, used Body Glide (which, I highly recommend), worried, complained, applied Rock Tape, put ShotBloks in my sports bra and ate them six miles later (they were in a plastic baggie, I’m not that disgusting), smiled, celebrated and while I didn’t always love it, I’m so glad I did it.

As I look back, I am truly in shock. It hasn’t hit me yet that I don’t have to run a set mileage today, why I am still so hungry or the fact that I can now say, ‘I ran a marathon.’ It was definitely worth the 18-week training, mixed emotions, blisters, sore muscles and sacrifices. Needless to say, I can’t wait for my next one! Oh and I placed seventh in my age group. Extra motivation? I think so.
Posted by andrea70188 at 3:43 PM