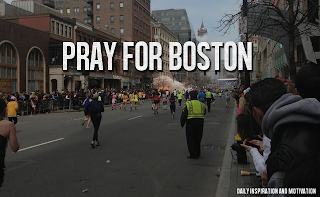 As a little girl growing up New England, Patriots Day was more than just a day off from school. It was a day that I spent with my family – simultaneously watching the Boston Marathon with my grandmother upstairs and the Red Sox with my father downstairs. Sometimes I swear the yelling my grandmother and father did for their respective sports could be heard somewhere along the Charles. It was a day that I spent eating oatmeal pie after oatmeal pie with my sister imagining how cool it would be to be in Boston that day. To me, the times in which the elite’s finished were inconceivable and the amazing experiences the age groupers must have had was unimaginable. It was just a great day no matter who you were.

As I’ve grown older, Marathon Monday has been a bit different for me. I decided to attempt my first full marathon in 2010 and also made the 90-mile trek to Boston with a few friends to cheer the runners on at mile 26. I was only four weeks away from my first 26.2 and I’m not sure if witnessing this was a good idea or not. I screamed for Ryan Hall, Kara Goucher and the like before the age groupers made their way past our front-row seats. It was then that I saw runners in serious amounts of pain, some with tears in their eyes and others even vomiting. Of course there were plenty of runners that were completely fine and looked as though they were on Boylston Street’s Cloud Nine, but as a nervous first-timer, I only saw the misery. In the days following, I couldn’t help but question my intelligence about this decision to run 26.2 miles in the mountains, no less.

(Side note: I did it, though, and two more times after that. Running my first marathon at Sugarloaf was an experience I will never forget and one that I will never be able to duplicate. Although they’re not easy, I’ll keep running marathons, if for nothing else other than that awesome feeling of accomplishment.)

Last year I lived in New York and couldn’t do Marathon Monday with my grandmother, sister or with the thousands of supporters at the finish line. I watched the live stream from my house on Coddington, cheering from afar and just enjoying the excitement of the day. It was just two weeks later that I found out that I would be moving to Boston and submerged in marathon madness on Patriots Day 2013. I would finally be there – all day – from start to finish – just as I had fantasized about as a kid.

No matter how old I was, Marathon Monday was a magical day and I thought for sure this would be the most memorable of them all.

Memorable it was … but, for all the wrong reasons.

I was at the finish line from 8 a.m. through the early afternoon and yet, managed to escape unharmed. To think that I was there moments before the first bomb went off is as absolutely insane. The day was surreal – right out of a movie. I called my mom right away to tell her I was ok and tried to get myself together. As I made my way home, I saw hundreds of police and medical officials responding, a site that really put things into perspective for me. Could someone really have done such a thing on Boston’s best day of the year? I just couldn’t come to terms with it. I went for my afternoon run as I had promised myself earlier in the day and when I got home, reality set in. The emotional flood gates opened as I tried to come to grasp with what had happened and even more so, what could have happened.

I feel terribly for the 176 victims and their families; I’m sad for the sport of running; I’m angry at whoever did this; I sympathize with everyone in this very somber city and so I want to help. I can’t donate blood because I actually did so two short weeks ago. Tuesday morning, my friend Kristen and I vowed to run one mile for each victim over the course of the next three weeks. This is my way of coping and helping so I’m inviting whoever else wants to join – near and far. Kristen and I are working with local running groups to get the word out so hopefully we can get some great groups together. Boston Strong, Wicked Strong.

I can’t forget to mention the insane amount of calls/texts I have received over the past couple of days. Over 100 people checked up on me Monday and my parents even got calls on my behalf. It’s been extremely humbling and I have never felt so loved. I’m so grateful for my friends and family and send out hugs to each and every one of them.

I’m not sure I’ve still really wrapped my head around it and each day the what-ifs hit me all over again. Things will get better and easier and I am fully convinced that the 2014 Boston Marathon will be the best yet. I may or may not even partake in said 26.2. 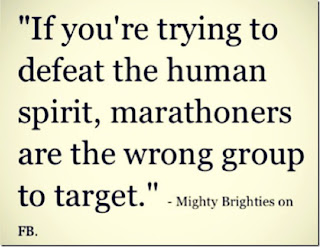