Ever since the 2010 Boston Red Sox schedule was announced, I made it my personal goal to attend a game in the series against the Los Angeles Dodgers. Like I previously mentioned in last week’s post, MANNY RAMIREZ was returning to Boston for the first time since his cross-country trade. There was no way I was going to miss my chance to tell the man who formerly donned a red No. 24 exactly how I felt about his departure. So, I bought Dad and I tickets for his birthday and off we went to show our appreciation for the now No. 99-wearing, previously-suspended-for-steriod-use, dreadlock-sporting Ramirez. Sure, in his eight-ish years in Boston, when he was good, he was great. I loved how he was so carefree – talking on his cell phone inside the Green Monster, rolling around in the outfield and pointing to the sky when he knew it was gone. I still have a huge picture of his homerun reaction in the 2007 ALDS against the Angels (hypocritical, I know). But, when things didn’t go his way, Manny let it be known. He performed poorly on the diamond, made outlandish statements to the press and told everyone that would listen he wanted out of Beantown, breaking the hearts of fans over and over again. That my friends, is why I wanted to witness Manny’s return for myself. Ninety-nine percent of me planned on boo-ing the hell out of him at every opportunity, but then that other one percent remembered how much he helped bring two World Series rings to hungry fans. When push came to shove, though, I joined the majority of fans and threw out a boo or two, or ten. Before the game, WEEI and at&t provided us with some sweet signs: 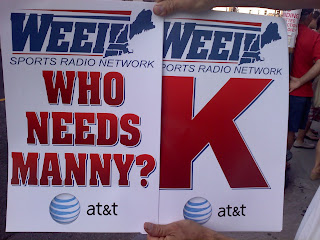 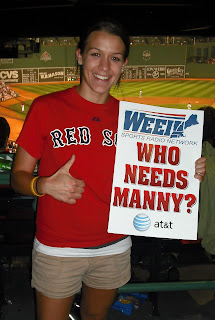 Usually, finding a fan of the opposing team at Fenway Park is like searching for a needle in a haystack. Not this time. Much like when I saw the Mets roll into town, there were Dodgers’ fans everywhere. I’m not sure if it has to do with Interleague Play or what, but the royal blue at the Fens was gross. Take a look at the picture I snapped outside of the park: 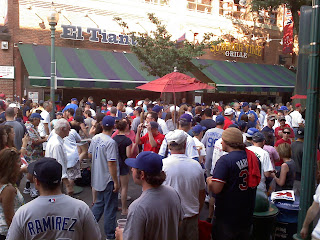 Worst part of the overwhelming number of L.A. fans, aside from the fact that the Lakers had just beaten the Celtics the night before, was seeing ‘Ramirez’ jerseys and t-shirts everywhere. I mean everywhere. This girl was nice enough to let me use her back to illustrate my point: 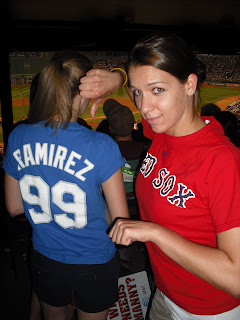 Celtics’ loss the night before also sparked some cool posters from Sox fans and bragging rights for L.A. fans. There actually were people wearing Lakers gear and they heard about it. Granted, Bostonians had no leg to stand on. Found this poster, which is Shrek-themed, I’m guessing for the new movie release, but either way, it says ‘Beat L.A.’ 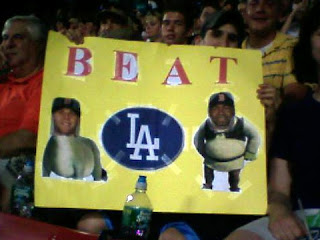 As always, Dad and I met some pretty sweet people before the game. Below is a former Boston coach inside the Yawkee Way Souvenir Shop signing one of our signs. (His named has totally slipped my mind and I can’t read the autograph, go figure.) When I asked him if he had any good Manny stories, I believe his exact words were, ‘not ones that I can share,’ which obviously means they were good. Please, also take notice to the enormous World Series rings he has: 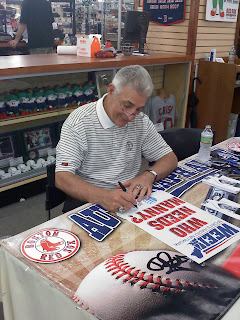 Much like the World Series rings the above man had, the next person we met has something I definitely want. Her name is Bertha, (yes, Bertha) and she has MIKE LOWELL! Ever since he joined the team in 2006, I have had the hugest crush on him. I love him, I miss seeing him at third and back when I first discovered him, I Googled his wife to scope out the competition. Well, I got to meet her first hand on Friday, and she is quite nice. She was working with a charity that benefits young girls in and around the Boston area. I won’t be marrying Mikey anytime soon, but from the 90 seconds Bertha and I spoke, I approve. Though, if this picture says anything, its that the former 2007 World Series MVP and I would look much better together … hehe. 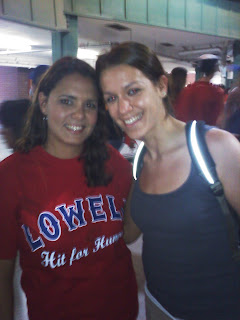 Now, for some actual game stuff.

I had two hopes for Friday night – that the Sox would finally win when I was at Fenway (I went 0-for-6 last year) and that Manny would absolutely blow it at the plate. Who would have thought that both would come true? I certainly did not. Anyway, Boston got off to a great start and took an early lead before LA tied it up in the third. A strong inning in which the Sox scored seven runs put ‘em up for good and the rest is pretty much gravy. As far as Manny goes, the boos drowned out the few applauses and ‘Man-ny’ chants he received at every appearance at the plate. The ‘Manny haters’ at Fenway were all over him every time he stepped out of the dugout and made the Dodgers’ intro impossible to hear. He had five at bats that went like this: groundout, fly out, single and two strike outs. Here No. 99 is in his final trip to the plate in which he struck-out with a full count to end the game. Fitting end I would say. 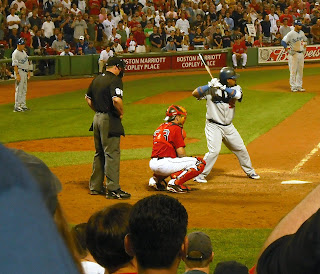 As much as I was happy to see him go a whopping 1-for-5 with two strike-outs, I really wanted to see him hit one over the Green Monster. Not because I wanted him to actually have success against my beloved Sox, only so that I could watch him do some sort of ridiculous-ESPN-not-top-10-esque trot around the bases. That did happen in the second game of the series, but sadly I have yet to see the replay. Also, big ups to new guy Darnell McDonald, who replaced J.D. Drew mid-way through the third. He comes to the plate to ‘I Made It,’ by Kevin Rudolf and Lil Wayne. Since that was the theme to my marathon, I immediately have some sort of love and respect for the guy. Not to mention every one of his at-bats makes me want to dance. This next picture is thanks in part to the random thoughts that fill my brain throughout the day. When the dirt-fluffers (as I like to call them) came out onto the field to do their thing for the second time, it got me thinking, ‘someday, I want to do that.’ Oh ya, I’m talking about exactly what you think I am talking about. Just one time, I want to experience the great privilege of fluffing the Fenway dirt in between innings. Don’t get me wrong, I’m not announcing my dream job, here, just a small addition to my ever-growing bucket list:

Here is my dad and I with our usher, Bob. He was the nicest, sweetest, funniest ushers I have ever met. He is the greatest photographer and he takes his job quite seriously. Anyway, Dad and I had tons of fun with him. 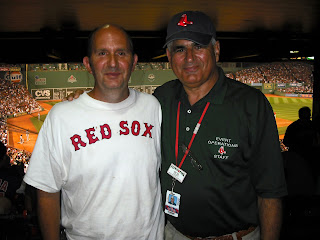 You better believe I didn’t leave Boston without picking up some new anti-Manny-go-Boston schwag. Best $15 dollars I’ve spent in a long time: 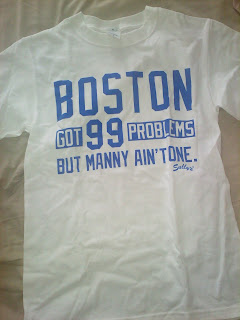 Aside from our unplanned tour of Boston due to my poor sense of direction, great time had by all. Ate at our favorite Thai restaurant, took a walk to the Prudential Center, grabbed pre-game drinks and finally saw the Sox win again! Here Dad and I are before the game: 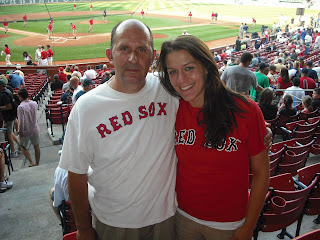