Marathons, Triathlons and Manny, Oh My!

To say this post has been a long time coming would be quite the understatement. The start of my summer has been everything but relaxing – early morning training, interning, working, double workouts and I have even made a bit of time for some fun! But, without further introduction, here’s a ton of random thoughts (in no particular order).

… Well, 16 days after running my first marathon, guess what? – I started training for No. 2! Call me crazy, but in those two weeks of random tri-training with no set schedule, I was a total mess. I would get to the gym and not know what to do – weights, cardio, spinning – couldn’t make up my mind. Needless to say, I am happy to back to training and I’ve taken on the assistance of Hal Higdon once again. I used one of his training plans for Sugarloaf and have decided to go with it once again. I picked a different one with a higher weekly mileage and intensity which allows me to run four or five times a week, bike twice a week and swim three days. Gotta stay in tri shape, too! Also started to keep a food journal to help keep me on the right nutrition track. Don’t really like when I have to record the afternoon M&M binge, but hopefully that will eventually stop. I have found that eating the right way really helps me train and race so much better – not to mention I’m getting pretty jacked. The goal of my first marathon was to finish, but this time, I want a PR (which shouldn’t be too difficult considering it took me four and half hours the first time around). Oh, and I also want to get under four hours. That, however, poses quite a challenge, but one that I’m so ready to take on!

… I am officially into the fourth week of my internship and I am glad to say that (so far) I’m having a blast. I’m working with a sporting event management company, planning and organizing triathlons and road races, marketing and managing sponsorships. Everyone I work with is pretty much a hardcore health freak and endurance athlete – basically, my match made in heaven. My first week we put on a trail running festival consisting of canine, barefoot 5K, 5K, 10K, 25K, 50K and 50 mile races. The hours were quite long, but being at the event really sparked my interest in trail running and I have set a new goal for myself – the 2011 25K race! It seems ridiculously challenging, but I think I’ll be up for it come next May. I just might have to waste some more money on some new fitness/running fad: the Vibram 5 Finger: (admit it, they look sweet) 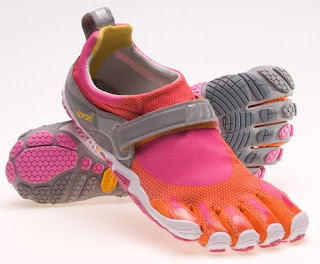 Oh and something else excited, finally met one of my fellow running Twitter friends – Jake, or @mainerunnerguy in Twitter speak – at the event! I believe that deserves a ‘neat-o.’ This past weekend, we put on a pirate-themed triathlon and I was all over it. You better believe I was sporting the pirate look, or trying to anyway. It was more like Pirates-of-the-Caribbean-meets-Brett-Michaels, but, hey, I tried. Arggggghhhhhh. Aside from the greatness of the day’s wardrobe, the actual event was awesome. My friend Jason, who I met just over a month ago – he was a real trooper and joined our Polar Bear tri team at the very last minute – completed his first sprint triathlon and did great! He says he officially has ‘the tri bug’ and can’t wait for his next. However, he hates the swim portion, but (little does he know), I’m gonna change that. So proud though! Also, got to see several of my friends compete, including one of my former high school teachers. It was different just being there and not participating. I really got to help them celebrate their accomplishment rather than focusing on my own race. No matter what vantage point you are taking in the tri from, it is so much fun. Here is the first wave of men heading into the water: 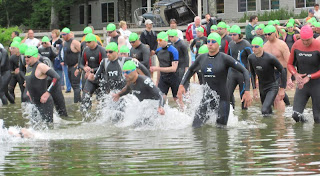 … Last Friday, mid-bike workout (it was raining, booo), a woman came up to me and told me that I inspire her! I thought to myself, ‘WHAT?!’ and I’m pretty sure it showed on my face, too. So, she went on to explain that every morning she watches me workout and tries to mimic what I do – from running, to lifting, to swimming. I couldn’t believe it and I still can’t. While it may sound kind of stalker-ish, I am pretty flattered. I just do my own thing and I’m really glad I helped someone else stay motivated doing it.

… For the last couple of years, I have been taking my father to a Red Sox game for his birthday. Lucky for him, I have always played two roles - Daddy’s Little Girl and Daddy’s Sports-Loving Son. I tell him he got the best of both worlds because, while I love to get all dressed up in a cute outfit and paint my nails all colors of the rainbow, I absolutely love everything about sports. As I have grown up and time has gone on, my father and I have been able to share a lot of moments together because of sports and I am so glad we have that common bond. Here we are last year (Mets vs. Sox; Johan Sanata vs. Daisuke Matsuzaka): Why am I telling you all this? Well, on Friday, my father and I will once again make the 90-ish minute trip to Fenway Park to watch the beloved Sox take on the Los Angeles Dodgers. I am so excited for this! Yes, I love baseball and I love the Red Sox and I love spending time with my dad, but, I also have developed this un-love of Manny Ramirez over the past year or so. Since the day he requested to be traded from Boston, I have been waiting for the day of his return. Well, it’s here! Friday will mark his first game back at Fenway since his cross-country move to ‘Mannywood.’ Should be a great game, and I hope it is. I highly suggest you tune in – you may even be able to hear me boo his first appearance at the plate. 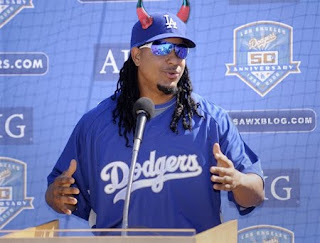 … Oh and how about them Celtics?! I don’t want to say too much about them yet, but I’m pretty pumped they got it together for the postseason. Game 6 of the NBA finals tonight from Los Angeles – another must-see this week.
Posted by andrea70188 at 10:27 AM