Will the Real Slim Shady Please Stand Up? 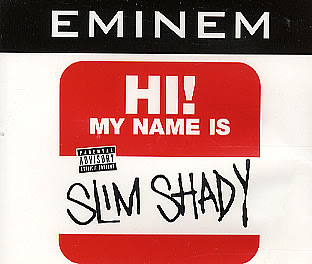 Well, I think he did. Two Sundays ago. In the Old Port. (Here’s to hoping he doesn’t read this, because he may take offense.)

Back to the story. One of my lovely friends decided that he should take it upon himself to set me up on a little date-ski. I mean, I thank him for the attempt, but NEVER AGAIN!! This dude and I were no match. We were kind of like pickles and marshmallow fluff. Who wants to eat that? I’ll get to our night but I must first tell you that I’m writing with a little help from Marshall Mathers himself. (You’ll see why in a bit).

7 p.m. In my car, waiting for him to meet me so we can go to the bar and watch the Super Bowl.

7:10 p.m. ‘The Real Slim Shady’ AKA – Our first encounter. I should have probably got back in my car at this point, but I didn’t because I’m into the giving-people-a-chance-thing. Here’s a little visual for you - size 3X white t-shirt on a 6-foot string bean, baggy jeans, and sneakers THAT WERE NOT TIED. I am in my cute little red pea coat, hot brown boots, tight jeans. Horrid match, the two of us.

7:15 p.m. ‘Must Have Been the Ganja’ AKA – The mother-load of maryjane. We run up to his apartment, and by run up I mean climb over snow banks, slide down some ice and up three flights of stairs, to ‘grab something quick.’ I’m thinking it’s a winter jacket since its FREEZING and YOU’RE IN A T-SHIRT! Well, he opens the door to his ‘chateau’ and BOOM! the scent of cannabis hit me in the face like bad fart. Thought it was his roommate … he doesn’t have one. Awesome. Oh and that winter jacket I thought he was going to put on was … another t-shirt. Go figure. 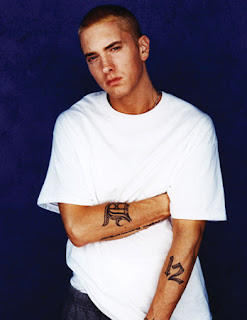 8 p.m. ‘Crack a Bottle’ AKA – Time for drinks. We head to Rivalries – the local sports bar – which was packed so he suggested we go back to his place and ‘chug a bottle of gin’. Thanks, but no thanks. (Why have I not left yet?) We trek to Brian Boru and make ourselves at home. He gets (you guessed it) gin and tonic and I get a water. I sneak off and text my friend, ‘so not feelin’ it.’ Minutes later, he gets so animated he knocks over his drink and the WHOLE bar looks at us. Meanwhile, I’m praying that no one recognizes me.

8:15 p.m. ‘My Words are Weapons’ AKA – I’ll fight him. The ENTIRE night he pointed out guys who he would ‘totally fight,’ ‘beat up,’ ‘show them what he’s made of.’ Listen buddy, that doesn’t impress me. 8:30 p.m. ‘You Don’t Know’ AKA – Who is this kid? We share stories, he tells me he loves sports and watches SportsCenter all day but when I say I hate Heinz Ward he says, ‘Who’s that?’ I tell him I drink whey protein every day, he says he drinks whole milk and eats bacon twice a day. Please, gag me. I shoot my friends a couple more texts when the man of my dreams goes for his 15-minute bathroom trip. Tops off the night of great conversation asking me what I like for music. I tell him that I like whatever is on the radio and listened to Kesha on the way here. He says, and I repeat … ‘Who? Who exactly is Kesha? Do you mean Keisha Cole?’ ARE YOU KIDDING ME? Keisha Cole – she is not hot and dangerous and does not wake up feeling like P. Diddy. How can you wake up in the morning and brush your teeth with a bottle of jack and not know who Kesha is? Seriously. (Courtesy to my friend for a bit of this.)

8:45 p.m. ‘Shake That’ AKA – The Opposite. We were supposed to go out Saturday night but the weather was bad so we rescheduled. He asks me what we would have done had we gone out the night before and he said, ‘I hope not dancing. I hate dancing. I don’t dance.’ Great. I had wanted to go dancing. I love to dance. It’s so fun. Needless to say, I will not be shaking it for him.

9 p.m. ‘Say Goodbye Hollywood’ AKA – The Great Escape. Texted my friend and told them to ‘get me out.’ Thank god she was on top of it and I thank her a ton for that. Not sure if the dude believed me, but I got out. 9:30 p.m. ‘8 Mile’ AKA – The Walk to my Car. And ‘Everything is Shady’ AKA – The line of the night. On the way he says, ‘Man I’m wasted and you’re not. I planned this poorly.’ Wow, so eloquent with the words, huh? We hugged (only for a split second) and he told me he would ‘hit me up.’ I left it at that and laughed the entire way home with my savior of a friend.

Hope this was entertaining for all of you and that you think twice, maybe three times before you go on a blind date. Oh and for the record – he told my friend that he would ‘hit it.’ Job well done by me I guess.