The Best Yet? Quite Possibly

If you've read this before, you probably remember how my father and I went to the Red Sox back in June for Manny's return to Beantown. Well, I had to top that this Christmas and I'm happy to report that I think I might have! If you weren't following my crazy tweets that day, here's a little hint as to what I did: 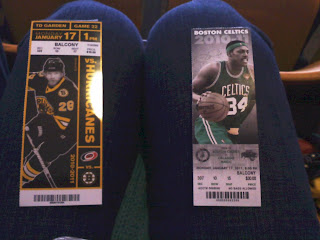 YUP! On Monday, I took my dad to a double-dip at the TD Garden - Bruins vs. Hurricanes at 1 p.m. and Celtics vs. Magic at 8 p.m. We had an absolute BLAST! Part of the awesome part of getting him tickets for his birthday/Christmas/Father's Day is that I get to go with him. We always have fun, but this time was even better. If I had the ability to do so, I would give it four thumbs up.

Through all of our trips to Boston, we have adopted this bad habit of always taking a wrong turn on the way in, but this time we didn't even do that. I will briefly mention that I did forget the tickets in the car and realized it at 11:51 a.m. as we entered the Garden. Luckily for me and my safety, retrieving them only meant that I got to give my dad an extra 20-minute 'Taking the T' lesson.

Anyway, we finally got settled in for our first game - the Bruins. I took this weet picture of the Garden during player introductions: 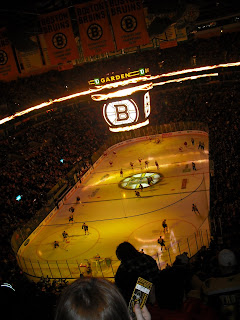 I'll admit that I was excited to see some live NHL action (I had never been to a game before), but I honestly thought I would be bored. Boy was I wrong. It probably had a lot to do with the fact that the Bruins scored seven goals. Crazy, huh? Three in the first and two in both the second and third periods. Tim Thomas made some great saves for the B's, Adam McQuaid beat the crap out of some guy for a total of 17 penalty minutes and Zdeno Chara netted his first career hat trick. 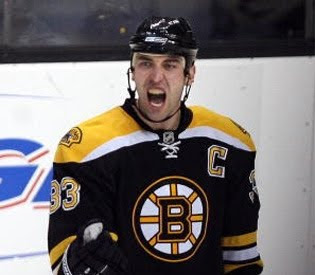 I thought the hat trick was the coolest thing ever. Chara scored his first goal coming out of the penalty box, his second on a fast break and third on a slap shot. After his second, I made it very clear to my dad, and probably everyone around us that I really, really, really wanted to see him score three and record the hat trick. Obviously, I just wanted to see everyone throw their hats on the ice and they did just that. Next time, I'm bringing a hat with the very intention to throw it on the ice. 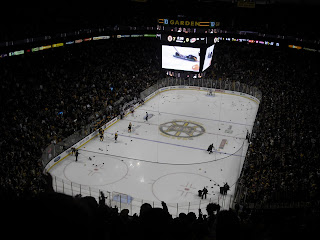 Bruins 7, Hurricanes 0.
I really would have loved to stay and watch the change-over of the Garden floor, but beggars can't be choosers, right? Fast forward through lunch at Four's, a visit to the Prudential Center, some browsing at Williams & Sonoma and a quick souvenier shopping trip to the second game. All throughout the day, dad and I discussed how pumped we were for the game, how close we thought the score would be and how we hoped Kevin Garnett would make his long-awaited return. Check, check and check! Welcome back to Boston, Garnett! I have loved this guy since he was a T-wolf and he was injured the last time I went, so his return was perfect timing. Here he is finishing his usual hit-my-head-so-hard-off-the-backboard-I-probably-can't-see-after routine: 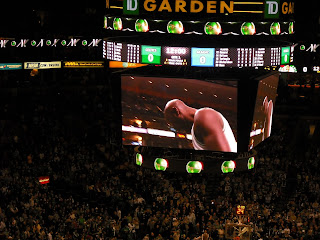 And to compliment the previous shot I took of the Garden before the Bruins game, here is one from the Celtics: 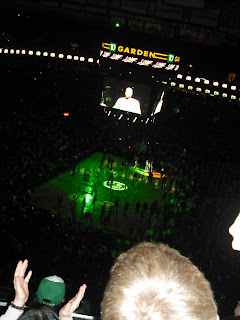 Before I get to the important game-like things, I must mention some details about our surroundings. Two people that I work with were sitting in the seats right next to me. Like I was seat 16, they were seats 17 and 18. Weird. Oh and these three guys in front of us were also pumped about KG's return. They held up the letters 'K' and 'G' and number '5' pretty much the entire time. Anyway, onto the game. 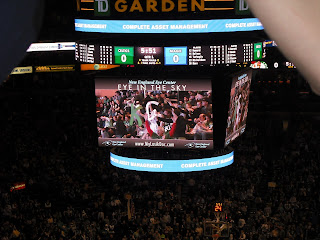 It was one of the best Celtics games I have seen in a while and by far the best I have witnessed. It was some serious exciting, high-intensity, back-and-fourth, edge-of-your-seat action. The Celtics pulled it out late in the fourth, responding with a clutch fade-away 3-pointer from Ray, a typical score-the-bucket-and-draw-the-foul play by Pierce and a timely steal from Garnett. Have I mentioned how much I LOVE the Big 3?
Celtics 109, Magic 106.
All in all, FANTASTIC day. 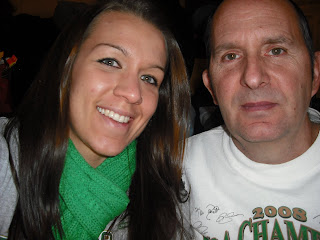 GAME NOTES: Got some free yellow towels and green towels at their respective games that will look great in our 'Man Room' ... Met some guys on the T-ride home that were from Portland, ME ... The crab cake appetizer at Four's was enormous - roughly four or five inches in diameter! ... Ray Allen's mom has the sweetest jersey ever. I'm talking white with silver sparkles EVERYWHERE! Where can I get one? ... Both organizations did their respective tributes to Martin Luther King, Jr. This was shown several times throughout both games: 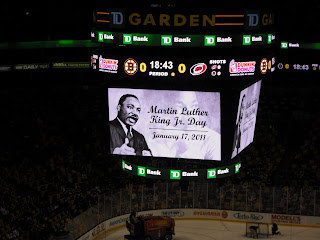