Into the Mud Challenge

Just over two weeks ago, my Sport Event Management class at the University of Southern Maine held the inaugural Into the Mud Challenge. It was a 2.5-mile 16-obstacle mud run (you have NO IDEA how many times I said this, typed this, heard this) put on completely by students. We did absolutely everything from start to finish and I couldn’t be more proud of my fellow classmates. This damn thing consumed my life. Ask anyone who has seen me in the past five months. This consummation was definitely my own fault – I took on the position of Race Director – but I mean Event Management is what I want to do with the rest of my life.

Alright, on with this Into the Mud Challenge thing.

We started planning this back in September but really kicked it into super-high gear in January. I should have known this class was going to be high stress when we had a legit argument about what to call this event during the first class meeting. Good thing my side won and we ended up with Into the Mud Challenge. Haha.

Throughout the rest of this post I’m going to refer to a lot of people so let’s get it straight who they are now.

My Justins. Yup, for five months, I had two Justins. Haha. They were my right-hand guys and I could count on them for everything. They were two of the Race Managers and did a phenomenal job with all things race course and festival area. I seriously think I had 50 phone conversations, maybe more, with each of them the week leading up to the event.

My guys/dudes/men. Again, I’m taking possession of people. These guys I refer to were my Event Operations group. Looking back, I couldn’t be happier with the group that I was assigned to. We made fun of each other (well, they made fun of my pink rain boots), we laughed, I baked them cookies, they drove me crazy, I know I drove them crazy, we complained, we gave each other nicknames (that’s for you, Big Jon!), and laughed every time someone said ‘where are the hoes’ without the word ‘garden’ in there, but we got it done and had a great time doing it.

My professors. We were lucky to have two wonderful ladies guide us through this entire process. While I admit I sometimes wanted to freak out at them, thankfully for all involved, I didn’t.

Back to event preparation. In the four weeks leading up to the May 7 event, my guys and I were out there all the time. I’m not kidding when I say this. Every so often we had the privilege of some additional classmates, but for the most part it was us, a whole lot of landscaping tools and the woods. I became one with nature, used an axe, started a rototiller, got a farmer’s tan, found a tick or two on me, but I’m proud to say I never peed in the woods!

Here’s Brett cutting branches off a tree we ultimately cut down anyway. Haha. 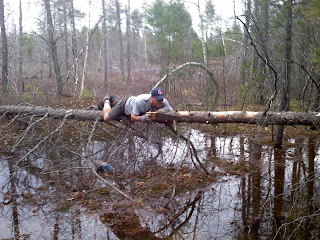 As the event got closer, one of the Justin’s appeared on local television show, Good Day Maine, with me. The five-minute segment went super quick and I’d say we pretty much dominated that thing. Don’t we look cute? (Note the sarcasm. Horrible job freezing us, FOX) 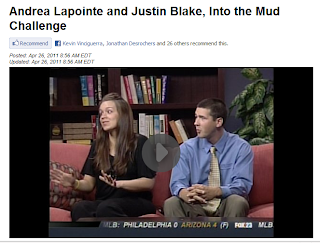 More course prep … Justin, Kevin and Nick tearing up and soaking down the course with a fire hose. Actually, it looks more like Kevin and Nick watching Justin do all the work, but does it really matter now? Haha. 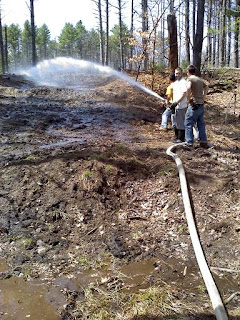 Oh and take a look at this … the beginnings of the giant mud pit that greeted participants at the end. 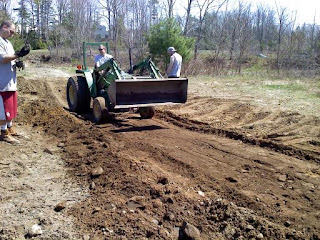 Now for the actual event. It. Was. Great. We had 362 people – 162 more than we had originally hoped for! Everything went completely flawless and I couldn’t be happier with its success. Putting on this event required a whole new level of dedication – My car turned into a utility vehicle, I wore rain pants, I picked up landscaping tools at 10:30 p.m. on a Thursday night, I thought about tarps before I fell asleep, dreamt about the event and pushed the heaviest cart ever around Wal*Mart.

Here are some great pictures from the event: 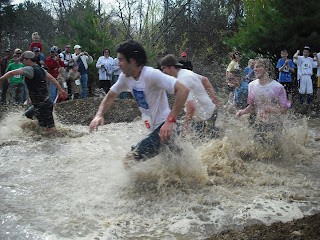 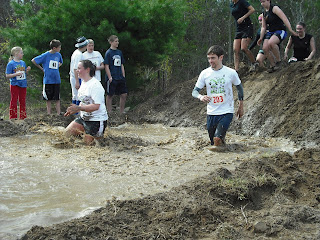 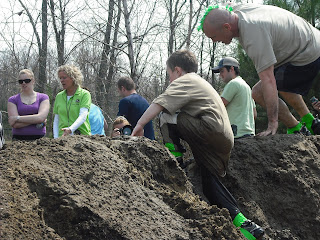 I know you wish you were here. We actually wish we ran it, too. Maybe we’ll make an appearance next year, but we were busy making sure everything went smoothly this time around. Here’s one of my Justin’s and I post-event. 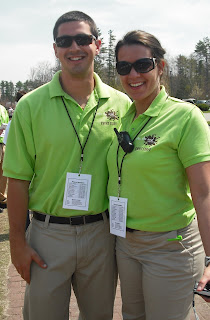 Justin and I were actually so close to running the course the night before but instead got an ‘emergency’ call for help from our professors moments before we went out. I didn’t really think it was a huge deal, but Justin rushed me along and come to find out it was. Slightly more of a humorous emergency, but still an emergency. When one of my professors tried to loosen a spigot on a nearby building, it came loose and 90 pounds of water pressure flew out of the building and did not stop. I wasn’t about to attempt to fix this, but poor Justin tried to shove the spigot back in there. No dice. Luckily we had a call-this-in-case-of-emergency number and literally washed our hands of it. I wish I would have taken pictures of this, but sadly, I didn’t.

I was so happy to have both my friends and family there to support me day of. Here I am with Misty (volunteer) and three participants: Misty’s son Zach, Veronica and her daughter. 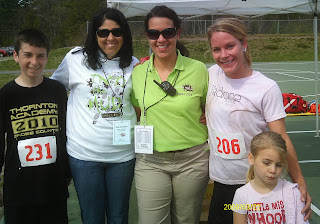 Veronica and Arianna definitely get props for the event’s cutest picture! Apparently Arianna was not loving it, but her marathon-running mom was not about to let her quit. So. Cute. 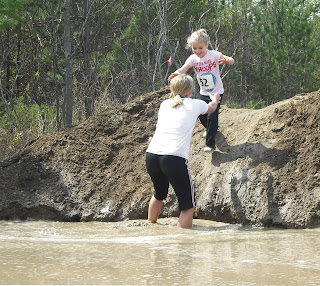 And here’s one of my favorite teams. We’ll call them The Doctors. My sister, her boyfriend and her friend. 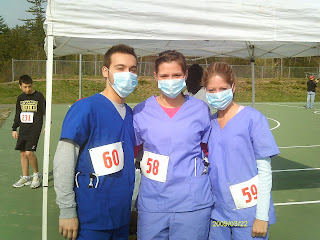 Check out this action shot of my sister absolutely LOVING the mud. Haha.

And another, Team Olive Garden, complete with green linens crossing the finish line. They look great and had so much fun. 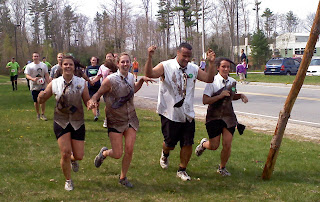 And here’s my entire class, complete with our professors, post-event: 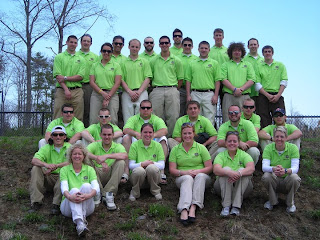 For most of my classmates, this was just another class they took. For me, this was something that helped to confirm my future. It could have been the relief that it was over or it could have been the fact that I didn’t sleep the night before, but I actually felt kind of emotional at the end. I was so pleased with everything Into the Mud Challenge and glad it wasn’t a huge flop (believe me, I worried about that happening a lot). Every instinctive decision I made seemed to be the right one and I am confident in my ability to lead. Now that it’s all said and done, I think I really could make this my career. With the help from a couple friends, of course.

In the days following Into the Mud Challenge, I got two messages that meant the world to me. The first, from my former internship boss, in which he shared how impressed he was with the event. He told me it was very well run, had great numbers and was so much fun. The second came from a friend who participated simply because our friends were, too. The next morning, I woke up to, ‘That picture you posted on my wall is great! I had such a great time yesterday!’ This girl is not a runner, nor do I think she wants to be and that’s why I was so happy that she has fun. If we were able to create an event that someone out of the target demographic enjoyed, then hands down, it was a success.