Two years ago, one of my trusted professors told me that I should seriously consider attending graduate school upon completion of my undergrad at USM. At that time, I was convinced that I would be continuing my education in journalism – specifically broadcast. I had wanted to be a sportscaster since I was oh, about, five years old, so that’s what I was going to do. Then, last spring, I took a sport marketing class as part of my business administration minor and BOOM! I was in love with all things sport management. Long story short, I interned at a sport event management company over the summer and focused my final year taking each and every sport management class I could. I decided at the beginning of last summer that I wanted to pursue my love for sports and advance my education through a master’s in sport management.

It all started on October 23rd when I got a whopping 950 on my GREs. Definitely was not expecting that. I read somewhere that average was 1000 so needless to say, Andrea felt like a giant idiot. After more investigating, I realized that it would probably be a good idea to take the GMAT, especially since I bombed the first set of standardized tests. Well, that went about as well as the GREs. Once again, scored just below the 500 average with a 490. COME ON! I was not impressed. The idiot complex soared, but I wasn’t about to take either of them again, nor did I have the time. So, on I went to applying.

The University of Central Florida was due January 15 and at the time, it was my first choice. Warm weather, Orlando Magic, great program, hundreds of miles away – how could I go wrong?

Syracuse University and University of Massachusetts were next. Syracuse … I’ve wanted in here since I was a kid. A few of my friends have attended and were huge advocates, along with my sports professor. Unfortunately, the Cuse does not have a sport management master’s program, but they do have the top broadcast and digital journalism program in the country. I had to apply. I mean, sports broadcasting has been my dream forever and I couldn’t give up on it that easily. February was definitely a month for applying to the country’s top programs. UMass was a super duper looooong shot as one of the top two sport management programs in the country. It was the second ever established and I figured since I was doing all these other applications, what was one more?

Ithaca College was due by March 1 and then South Carolina followed with a summer due date of July 1. I was in the application groove and hammered those two out right after Syracuse and UMass. I really, really liked Ithaca – it’s program, the highly-recommended staff, the city, the opportunity – but I’ll admit, the fact that it’s in the New York snow belt was not cool. South Carolina on the other hand – great weather, Division I sports – sounds pretty good, huh? Didn’t really love their program, but one of my trusted professors said it was a top school, so add that to the list.

Then came the hard part, the wicked hard part, if you will. Waiting. Waiting. And more waiting. You can ask any one of my friends, family members, gym girls, co-workers, classmates, you name it. I. Was. A. Wreck. It’s all I thought about and all I could focus on. Two of my best friends had already been accepted and I couldn’t stand waiting. Alesia had gotten at least three acceptances before I got my first response.

It was just days after I sent my application to UMass that I opened my e-mail to find a message from the UMass Graduate Office. My heart sank and my stomach fluttered. When I saw it, I was sitting in a meeting, one that I was supposed to be leading, and I contemplated for a good five minutes whether or not to open it. I have no idea what happened in those five minutes, but I opened it. Bad. Idea. In big, and when I say big, I mean size 72 font, red letters, I saw the word DENIED. Oh man. I didn’t know what to do. (Note to self: Never open an e-mail determining your future during a meeting. I was toast after that.) The only thing that made this okay was that I knew it was my long shot and I didn’t expect to get in anyway.

Days went by and I eventually got over it. That is, until I received another gem in my inbox, this time from Central Florida. My heart raced (this could have been because I had just returned from a run), my stomach ached and I clicked it. After reading the first sentence, I knew where this was going. ‘Thank you for your application…yada, yada.’ I was 0-for-2. Immediately, the tears poured out of my eyes and I followed that with the longest shower I had in a long time. I was devastated. At that point, I had convinced myself that I was going to Olive Garden University and was going to turn into the biggest townie this place had ever seen. I could see it – Friday night football games, wearing my high school colors around town, hooking up with former boyfriends, looking forward to grocery shopping, etc. I was a mess.

A couple days later I met with my trusted professor and nearly had a breakdown in her office. She pretty much told me to chill out in a nice, understanding, caring, sympathetic way. She gave me a couple more schools to apply to that didn’t have as she said, ‘such high requirements.’ Leave it up to me to apply to some of the hardest schools in the country without a safety school for backup. After much investigating, I figured it wouldn’t hurt to apply to the University of Louisville. My professor couldn't stop talking about it and said it would be a great place for me. The timing was actually perfect – I was days away from visiting a friend who is enrolled in the same program I would be and so I scoped it out with different eyes.

Just before I left and days after my professor-led counseling session, I decided to check the Ithaca database to see if I had been denied from a third straight school (I know, so positive). Funny thing happened. The database loaded and next to my name was one word that read: Accepted. ACCEPTED?! WHAT?! REALLY?! I didn’t believe it, obviously. I even took a picture and sent it to three people – my two friends that were recently accepted into grad school and my one friend that was already attending Louisville. They confirmed that I wasn’t nuts and so the celebration began. I was the only one in my house at the time but Katy Perry and I did a whole lot of dancing and singing to ‘Firework’ that afternoon. I was on cloud-freaking-nine for a couple of days/weeks. I pretty much felt like Rocky when he got to the top of the Art Museum’s 72-step stairway. 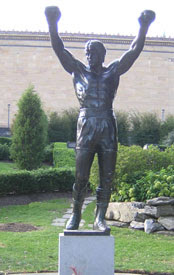 Oh and in the midst of all this, I went to and came back from Louisville. I had a great time and could totally picture myself there (the 4th Street bar scene might have had something to do with this). And so I applied.

Then came my acceptance, yes acceptance, to Syracuse. I was one of a dozen students to get accepted to the best broadcast journalism program in the country and I was thrilled. Even though this wasn’t my first choice, I was extremely happy and seriously considered switching my entire career path. I hated the thought of completely throwing away a dream that I had since I was in kindergarten, so I did some investigating. Once again, timing played a huge part in helping my decision. I spoke several times with two local news anchors (one of which does sports) and even took a little field trip to one of the stations. I also appeared on a local news show to promote a mud run my sport event management class was putting on. All of those conversations, experiences and interactions with broadcast news confirmed my love for sport management. I no longer wanted to be the outsider looking in, searching for information and reporting it to information-hungry consumers. I wanted to be the information source, the one in charge of the action, telling the media that the athletes aren’t ready for their questions yet. And that’s what I’ll do. Too bad, cause I would have looked damn cute in this: (I’m sure Danielle is in agreement.)

In the meantime, I was awarded a graduate assistantship at Ithaca working with the Head of Athletics. It would cover nearly half of my tuition and give me a stipend. This snowy city was sounding a whole lot better each day. Oh, I almost forgot! Speaking of snow, the day after I returned from Louisville, my mom and I drove to eight hours to Ithaca. I was scheduled to meet with the department head, professors, get tours and experience the city, but Mother Nature dropped a foot of snow on the city and I had to get out of Dodge quickly. I really liked what I saw, even if it was in shades of white, so I felt a lot better about the possibility of becoming an Ithaca Bomber (seriously, who comes up with mascots?). However, I was able to talk with the department head and she said everything I wanted to hear about the curriculum, internships, her connections and my future. (I bet you know where this is going…)

To make a really long story short, I was also accepted at South Carolina and Louisville. South Carolina has offered me two assistantships, one of which covers the entire two-year tuition, but I just don’t love their program. Oh and going with this mascot thing … they are the Game Cocks ... and in the words of Kevin from 'Home Alone,' 'I don’t think so.' Then again, I could wear this shirt … 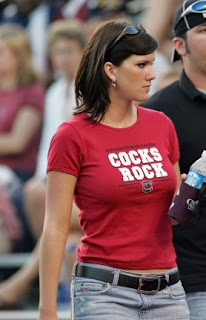 I have yet to hear about financial awards or graduate assistantships from Cardinal Nation, but unless it’s handed to me on a silver platter (thanks, Andrew!), you can find me donning blue and gold at Ithaca. On paper it seems like this decision was easy, but it was one of the toughest I have ever made. Just ask that laundry list of people I previously mentioned.

There will be so much more on this in the coming months. You know, the sappy, exciting, can’t-wait-to-leave, don’t-want-to-leave, what’s next, etc. Get. Ready. 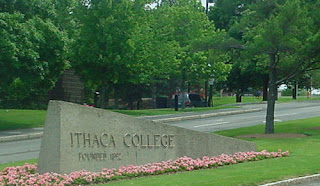