Everything under the sun

Couple of fun things from the past week or two …

I am proud to say that I have the coolest cousin ever. His name is Tyler and he is a 16 year-old high school junior. Ever since he has been little, I mean little, like five or so, he has been a Weather Watcher for a local news station here in southern Maine. Needless to say, they love him there – the meteorologists, sports guys and news anchors – all of them. He was a part of their early morning broadcast from 6:30 to 7 a.m. and so I tuned in during my workout. Obviously, I told everyone I knew that was there what was going to happen and so we were all focused on the screen when my cousin appeared. I was completely surprised because he was on not just once, but twice! They also let him do the entire forecast by himself. I expected it to be a quick appearance like he had made in the past, but he stole the show! It was so cool and he did such a great job. I’m pretty sure I was smiling the whole time he was on. I couldn’t be prouder. Here he is with one of the head meteorologists: 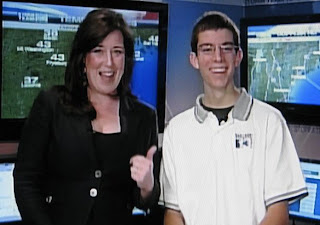 This year, my mother’s birthday once again happened to fall on Father’s Day. (This is especially weird because my dad’s birthday fell on Mother’s Day this year AND they were both born at 9:21 p.m.! Guess it was meant to be.) Anyway, my sister and I both reserved the day to spend with the family so we headed down to Portsmouth for the day. I’m not going to chronicle the entire day, but I do want to mention where we ate lunch. It was formerly known as Muddy River Smokehouse, but has recently changed to Portside Seafoods. Rachel Ray’s ‘Tasty Travels’ inspired our visit and we did just like she suggested – order crispy fried pickles. Great suggestion indeed. I know it sounds absolutely terrible, like they would make you instantly sick, but they were a hit with us. Just don’t overdue it, otherwise, I’m sure you’ll get some sort of sick. After our pickles, we proceeded to the main course. For me – baked haddock, Mom – lobster pie, and for my father and sister to split – The Captain’s Platter. This thing was enormous – the plate was wider than my sister and the food was about a foot high! Take a look for yourself. 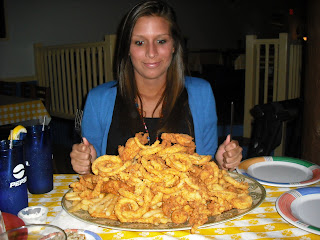 My sister and I also had way too much fun trying on hats in this toy store. Probably should have bought these: 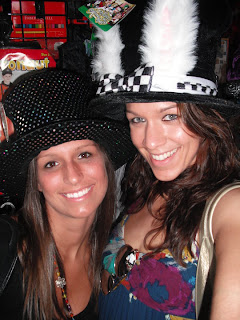 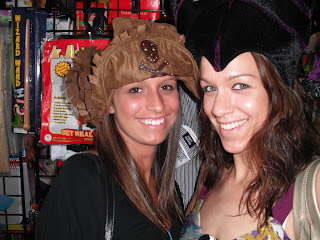 My BFF, Jessica, and I also hosted our first Silpada Designs jewelry party and had such a blast. We were able to reconnect with so many of our friends and family and got a ton of free jewelry. Sounds like I can file that under ‘huge success.’
It’s racing season and everything is in full force! I guess you could say I ‘competed’ in a practice triathlon this past weekend. It was just for fun really, and to see how I matched up with my age group. It was timed and turns out I did pretty well – second in my age group to be exact! However, everything was done by hand, no chips and it was just practice – but I’ll take it. … Missed the first 5K my sister and I were going to do together EVER last Saturday because I was quite sick race morning. I was so excited to run with her and to support a local high school scholarship named after a fallen soldier, so I was bumming. I felt really horrible about missing it, but my sister didn’t feel like she was ready, so in the end, it all worked out. Little does she know, I’m planning on conning her into another … Next race is 4th of July. Should be B.R.U.T.A.L. It’s the L.L. Bean 10K, which is normally a fine distance for me, but its going to be 90 degrees and humid out. Awesome. Not to mention the course is full of hills and I think I’m nursing a self-diagnosed metatarsal stress fracture. Race day isn’t even here yet, so I can’t justify complaining, BRING IT Freeport!
Next post preview … Tyler will be joining me to co-write a post all about our family trip to the Red Sox last Wednesday. Should be pretty awesome! Stay tuned for that and be sure to read yesterday’s post about turning 22 (it’s a favorite already). 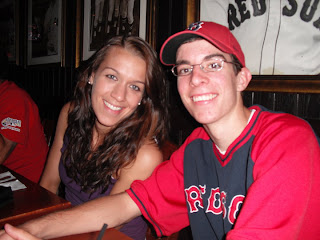