My Very Own Fitness Family

Just like any other hobby or sport, it’s nice to know people who have the same interests as you. In my case, I find it comforting and motivating to know that there are other people who like torturing themselves as much as I do. That being said, we runners and triathletes really do need each other – for a pat on the back, the occasional thumbs up, a yell of encouragement (nice or not) as we approach the finish line or a salt tablet midway through the worst race ever. They feel your pain, understand why you do what you do, look past the bad races and failed attempts at PRs, celebrate your accomplishments and love every minute of it.

Back when I was slightly larger than life, yes, I was ‘not cute’ as I often put it, I did not want to go to the gym and see people I knew. It was awkward and chances are I said ‘hi’ to them even though I didn’t want to. Well, now that I spend more time at the gym than I do at home, I LOVE seeing people I know at the gym. Granted, they aren’t the same people I used to avoid, and instead they are, indeed, my gym/runner/triathlete friends. We pretty much have synced gym schedules (or close to it), so it makes gym time even more fun. Like I described earlier, being able to relate to someone who has a crazy obsession like no other is GREAT. I mean it. It’s actually part of the fun to see who is going to come in next. We talk about past races, upcoming races, new workouts – all that fun stuff that I can’t talk to most people about. Just last week I was talking with one of the personal trainers and got suckered into attending an advanced boot camp class tomorrow. Of course, I’m going to drag along a friend, one that knows who to call in case I drop midway through. Nah, I won’t drop, but this is what I’m saying! I wouldn’t have wanted to go to the advanced class with out suggestion from a friend.

To continue on with this friend theme, back on July 4th I ran the L.L. Bean 10K with Danielle. I should post a picture of us there, however, this one is way more fun, and this post is about race communities (here it is, Jingle Bell 5K): 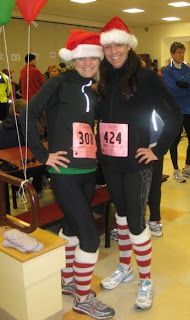 Going in I wasn’t feeling it, my foot, which I thought had a stress fracture (but does not!!!) was bothering me a lot and it was hotter than hell. Things continued along those same miserable lines for the entire 6.2 miles and up to the finish. When I finally did look at the clock, which I knew would read a time I wouldn’t approve of, it indicated I was eight minutes slower than my PR. Super. Even post-race sucked – by the time our slow selves got down there, the food was gone. Food tastes so good after a run, especially after a miserable one and there was none to be had!

Here we are post-race with THE @mainerunnerguy, Jake. He PR-ed and we did not. Another good reason to have running friends – you get to celebrate their accomplishments when you can’t celebrate yours! 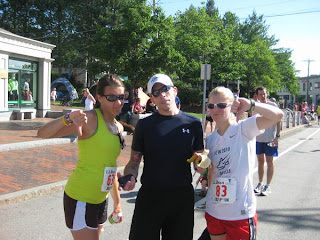 Why is this throw in here with all this positive stuff about running friends? Well, for that very reason. While the race itself was not too fun, I had a great time being with friends. I saw tons of people I knew, had my second tweet-up, took a salt tablet from my boss’ father, worried about this pregnant chick and obviously Danielle and I shared tons of fun laughs. Without my fellow running friends, I would have been miserable.

To further illustrate my point, remember my Sugarloaf post? About how I would have run the opposite way come race time if it weren’t for the amazing support I had from friends and family? Not to mention its WAY more fun to take pre- and post-race pictures with people feeling and looking just like you: 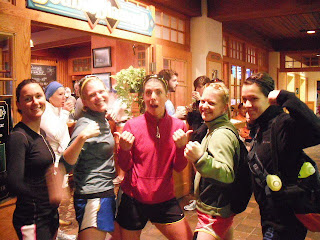 (Jenn, on the far left, also ran her first marathon that day. I had barely known her 24 hours and gave her a HUGE hug when we met up post-race. Point proven?)

Speaking of tweet-ups and running friends – Tentatively, I am planning on venturing out to California for the L.A. marathon in March 2011. I will be signing up in the next couple of days and booking a hotel shortly thereafter. If everything goes as planned, hopefully I will meet a good deal of my LA-running-Twitter friends who have encouraged my participation in this race for a while now. Some of my very non-running friends also want to join to lend their support which I am also pretty excited about. We will all be running the 5K the day before the marathon, which should be lots of fun. Little do they know that they might actually be carrying me onto the airplane come Monday. So much more on this to come!

I’ll end on this. Throughout these last two-ish years, I have developed so many friends and acquaintances that continue to help me achieve my goals. Whether it’s an old friend from high school, a former teacher, a family-friend, someone old enough to be my parent or the competitor I am forever trying to catch, together they all make up my fitness family. I have accomplished more things than I could have ever imagined and I’m so thankful for the people who have been there to share them with me.
(Side note and shout out to Danielle for her mad picture taking skills. I NEVER have pictures of other races unless she is there. Triathlons come with water and it is far too hard to bring my non-waterproof camera along. So, Danielle, start coming to my tris!)