Shipping Down to Boston!

I would like to start off by introducing my cousin, Tyler. You met him in my previous post in which I labeled him as ‘the coolest cousin ever.’ He still is, actually. He is here to help me co-write this post which documents our family trip to Boston nearly two weeks ago. Our parents have dubbed us ‘the happy couple.’ Don’t we look great?: 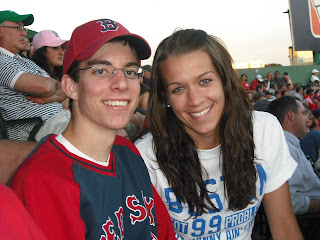 We like to plan. You know, the Venga Boys Like to Party, well we LOVE to plan. So, we had this thing down to a science. We knew what was happening when, who was going where and exactly how much fun we were going to have – right down to the minute. And 45 minutes in, we hit our first of many accounted-for speed bumps. Clearly the truck driver, whose rig went up in flames and caused a major traffic jam didn’t realize we were on the road. Otherwise, it would have happened in the Northbound lane. All jokes aside, we are glad to hear he is okay and instead, we took the scenic Route 1 to Kittery, where everything went down without a hitch.

Nine dollars in toll money later, we were basking the shadows of the beautiful Green Monster. But first, we needed food, and if you know our family, or even one of us – that was a top priority. Cask’n Flagon here we come. Took a couple cute family shots in the restaurant. Here are the ‘adults’: 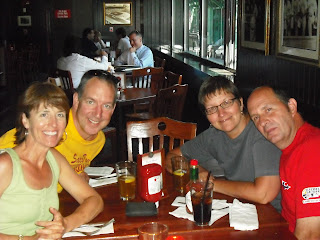 Food was great, we cleaned every plate. We enjoyed pretending to be the host of the TV show ‘Man vs. Food” on the Travel Channel. After all, it was the only competitive thing we’d be doing all day. After lunch we took a quick trip the Prudential Center. No one got lost and we all had DELICIOUS desserts – ice cream, cheesecake, candy – (we are healthy people, believe it or not). Here is a great picture of all the cousins: 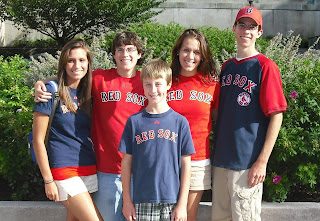 On the way back to the Fens, we saw the apartment where we think Tom Brady and his supermodel wife Gisele dwell. After successfully sneaking our food and drinks into the park (but not without some flirting by Andrea and Michelle), we ran into Larry Luchino, and he gave Cameron a sweet keepsake: 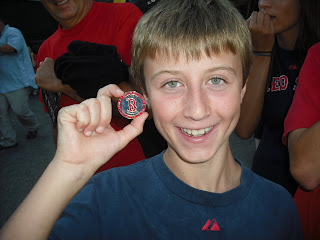 Our first mission once we got to our seats was to take the perfect family photo to give to our beloved Mem and Pep. Well, we all looked great, even the friggen guy who found a way to sneak in and ruin it. Our first encounter with a crazed fan of our future TV show (and we are still taking title suggestions)… we’re sure he won’t be the last.

Finally, at 7:10 SHARP (*ahem*, take note all you late-comers), we were nestled into our seats with visions of a Sox win. (Didn’t happen, let’s be honest, Dice-K was on the hill and Pawtucket headlined the line-up.)

We tried to keep a running diary of our thoughts as the game progressed:

Top 1st – Close one! PHEW! Nearly got into a mess twice, but Dice-K, with help from Cam, gets out untouched
Bottom 1st – Tyler and I invent a new pool game (swimming, that is). It’s a new twist on the oldie-but-goodie called ‘Marcooo’-‘Scutaro’
Top 2nd – Shelley touches up my hair, Dice-K is at 49 pitches ALREADY and Tyler very much enjoyed the in-between-innings music.
Bot 2nd – Youk comes out to a new song – ‘Not Afraid,’ by Eminem, we decided we hate girls wearing all pink, that the lemonade looks good and made fun of Uncle Dave for calling Jerry Remy ‘Jeremy.’
Top 3rd – First 1-2-3 inning and only six pitches. “Must be a record for Dice-K” – Tyler quipped. Wave also started here – way too early and super annoying.
Top 4th – Two runs score on a double – Dice-K acting like his old self, Dice-K cuts off throw to home and another run scored.
Mid 4th – Finally got the perfect family photo. Background looks fake, but we look great. Take a look for yourself: 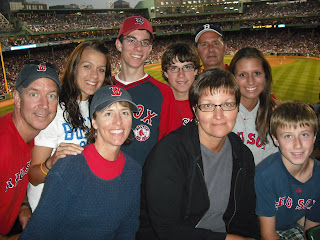 Bot 4th – WE NEED A RUN! But Youk strikes out with Ortiz on – best chance of the game. Shelley not-so-patiently waiting for a hot dog and some cotton candy.
Top 6th – Finally, hot dogs and cotton candy for everyone! (Clear highlight of the game – oh wait – the ONLY highlight thus far) 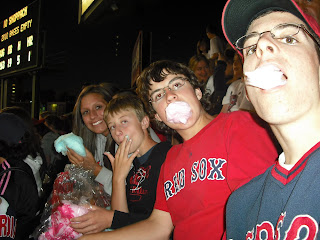 Oh, have I mentioned, I HATE THE WAVE!!
Ortiz doubles off the wall, hit in Patterson and the ‘Let’s Go Red Sox’ (I know you can hear it in your head) begins. However, Youk once again dashes our hopes and pops out to second.

Bot 7th – Spot a vintage Manny jersey a couple rows down. Seriously, whooo wears that now? However, made me feel a lot better after I thought of how we SWEPT those guys a month ago.
We just established ‘Mike-Cameron’. My dad is Mike, and my cousin is Cameron. Get it? Mike. Cameron. 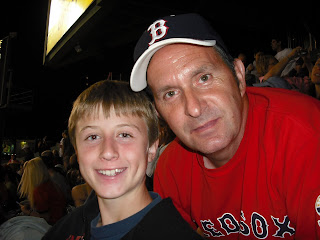 Tyler ingeniously recognizes ‘7:10 as our 4:20’ you know, some people enjoy the time 4:20, well, we love 7:10 – game time.
Bot 8 – Insane fan want to start wave again, crazy dancers not coming out of woodwork. Ortiz 2 RBI double – has knocked in all runs for the Sox thus far. Rally caps are out (Dad, Cam and Tyler): 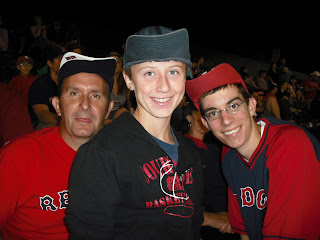 And that’s where the live diary stops. Manny Delcarman got shelled, we mean SHELLED. Game went on forever and that’s pretty much that. Made our way back to the cars, stopped at Sonic (a first-time experience for all), celebrated my birthday at midnight and called it a night. Yeah, there were some speed-bumps throughout the trip, but we still had a blast and you can bet we’ll be back next year… at 7:10 sharp, of course.
Posted by andrea70188 at 7:46 PM