Running For Those Who Can't

For the past two years, Labor Day has brought the Annual 5K Labor Day Classic to my hometown. This year was my first year running it and it definitely will not be my last. This race was started by Brian Denger and Joel Croteau in 2009 and raises money to fund research for Duchenne Muscular Dystrophy. Both of Brian’s sons have the disease, which has essentially immobilized the high school sophomore and senior. They are confined to wheelchairs and so Brian has dedicated much of his life to doing something his sons will never be able to – run. He has run long and short distances, near and far from home, all the while fighting to find a cure for his two beloved boys. The Labor Day Classic hits a lot closer to home for me than most races because I have known the Denger family since I was five. I went to school with their sister and my mother used to work with their mother. They are a really strong bunch of people and as I have grown older, I have really come to admire their courage and respect their drive to find a cure. Here are the boys – Matthew and Patrick: 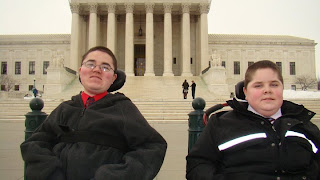 I’ve also recently been talking to Brian a lot via Facebook in regards to running. I sometimes feel like he’s my running father. No one in my family is a distance runner and he is definitely a seasoned runner, so I love getting his encouragement, feedback and advice. This was another one of the reasons why I signed up to run the 5K – why not support someone who has been supporting me?

Now, for the race itself. I did great! I usually hate the 5K distance and I anticipated this disaster in advance – so much so that I decided to run to the race. It’s only about 1.5 miles away from my house so it was a good warm-up. The temperature was perfect and despite my recent minor injury battles, the legs were feeling good so I decided I would run moderately. The only real hill is at the very beginning, so it’s a pretty easy course overall. I felt great through most of the race and was expecting a pretty decent time, but nothing like what I actually got. (Drum roll please) I got second in my age group! First time I’ve ever placed in a running race, so I was pretty impressed with myself. Check out the sweet medals age-group winners received: 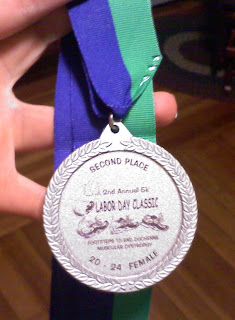 Knowing what I know now, I guess I should have run hard, but it gives me a goal for the next one. Here I am receiving my award post-race. Cutest little guy handing it to me, don’t you think? 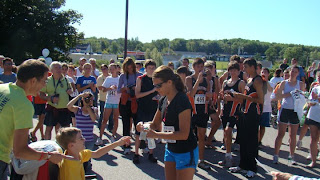 I also had a great conversation with Brian’s wife before the race and then after I finally got up the courage (stuff like this is hard for me to talk about sometimes) to tell her how cool I thought their family was. I can’t imagine dealing with 1/10th of the things she deals with on a daily basis. In the short conversation we had, she mentioned that I should run with the Parent Project for Muscular Dystrophy at the Disney Marathon. So, being the far too ambitious girl that I am, I approached Brian and told him I wanted to help. He seemed pretty excited – maybe even surprised – that I was interested. He suited me up with a PPMD shirt (even if I am swimming in the unisex XL), sent me some information via Facebook and pretty much gave me an offer I can’t refuse. I’ve got some technical details to work out, but if it all works like I hope, Disney 2011, here I come! I mean, I have been craving a big race, haven’t I?

For once, I thoroughly enjoyed this race. Couldn’t help but feel good about it all.