While I’m quite depressed that my summer is officially over, I love looking back at all the fun I had. It was by far the busiest ‘summer vacation’ I have ever had, but I got a lot accomplished and I wouldn’t have wanted it any other way. The weather was great, the fun was never-ending, the friends and family were always there and the new experiences were like none other.

Run, Run, and Run Some More
As you all know, I started off the summer running my first marathon. Best choice ever! I was on my post-race high for days and it was such a fun way to start off the racing season. As expected, the Beach to Beacon 10K was by far my favorite, and the L.L. Bean 4th of July 10K was beyond miserable. Without those yucky races you’d never know what a truly enjoyable race experience is, though, right? Sadly, triathlons took a backseat to running this summer, but I’m not complaining. Training for Maine has gone far better than training for Sugarloaf. I am nursing some minor injuries, but nothing that I hope I can’t overcome come race day. Got a 20-miler in the books already and I’m hoping to do a 22 and/or 24 before the marathon. Official countdown – 28 days!!

Supporting the Sox
Five Red Sox games this summer and heading to my sixth this week – Sox vs. Rays with everyone from work. I have most certainly blogged the crap out of my Red Sox trips this year, so I’ll just get to the point here. Through five games, I’m 3-2! That’s a new record and a great one at that. Last year, I went to six games and they lost every. single. one.

Never gave proper blog attention to my most recent trip, so here’s a short synopsis. It rained, but Dad and I had seats under the roof, so we were nice and dry. They won and Papelbon pitched the ninth and didn’t blow it. Basically, this means that we got to dance and sing ‘Sweet Caroline,’ ‘I’m Shipping up to Boston,’ ‘Dirty Water’ and ‘Tessie.’ Success. Pre-game, we met former pitcher Chris Howard, who had the most team appearances in 1994 and was also Roger Clemens’ roommate back in the day. When I found this out, I obviously asked him for a picture, told him I blog and asked if he had any fun stories for me. He was so nice to talk to and even gave me his phone number if I wanted to hear more about Roger. Here we are in the Red Sox souvenir shop: 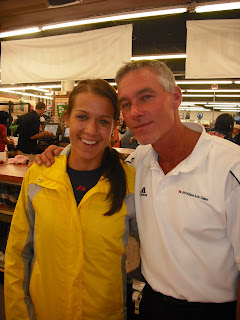 Remember, back a couple months ago I said I wanted to be a ‘dirt-fluffer,’ once in my life. Well, I definitely don’t want to be a ‘tarp-puller.’ Dad and I watched them move, fold and roll this thing in the rain and it just didn’t look as glamorous as dirt-fluffing. 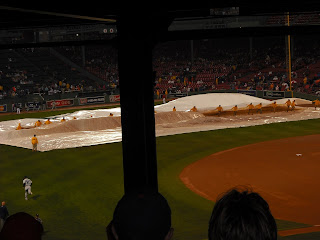 This next kid had the sweetest balloon-shape thing ever. I couldn’t help but think about the bicycle Vince Vaughn makes the bratty kid in ‘Wedding Crashers’ when I saw this: 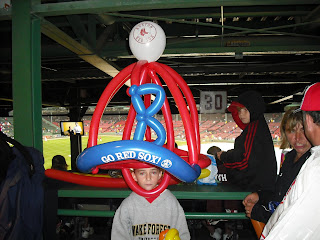 Back to Boston
Every year my friends and I venture off to Boston for the weekend and like always, we had an absolute blast. Usually, we go for two days and one night but this time we decided two nights was a must – one for the game and another to paint Boston red! Night one was the game – my first rainy experience at Fenway. Seriously, check out the sky behind us! 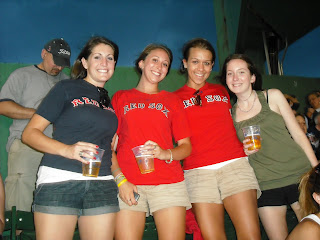 We had one massive downpour and a little bit of light rain even though it looked tornado-esque. Oh, and they lost. I’m not surprised. Keeks and I did not bring our raincoats, but at least we’ve got beer! 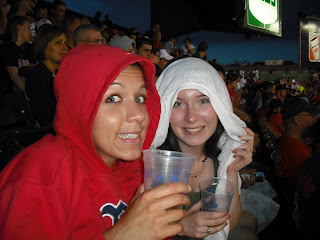 Is this not the perfect Fenway Park ad? We think so. 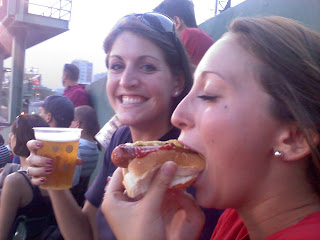 Day two took us shopping and to the Boston Public Garden – don’t we look cute? 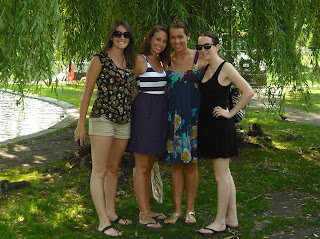 JPell and Keeks had other plans for the night so Jonna and I went off for some fun. At Kitty O’Shea’s before the dancing and jeep ride really messed our hair and outfits: 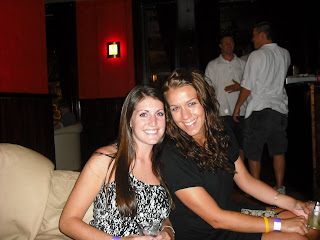 I could definitely make an entire post out of only this weekend, but that’s just not necessary. We had fun – lots of fun. You get the idea.
If they weren't my family, I'd still pick them!
Even though I had a million other things going on this summer and so did my family, we still made time for some quality together time. We are really lucky that we are so close with my mom’s side and so while everyone is still around, I’m a firm believer we should take advantage it. Here is the winning volleyball AND baseball team with Memere and Pepere at our most recent barbeque: 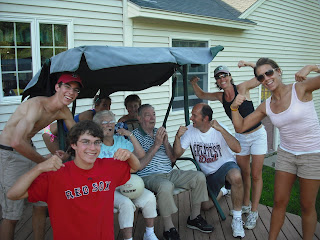 My sister and I also took our cousins to Water Country for a day. The day started off early with wonderful weather and ended with a little thunderstorm late afternoon so the park closed early. We were pretty bummed, but got free passes for next year! We essentially had a full day at the park since it only closed about two hours early, but still get another day on the house! Here are Tyler and I waiting in line: 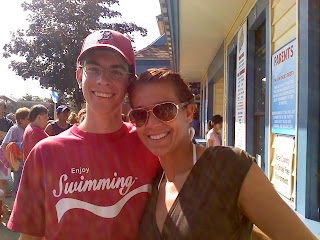 And my sister, Cameron and Ryan! 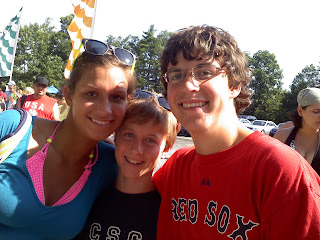 The Intern Life
I spent most of my summer interning at a race management company and while it was a boatload of work, it was so much fun! I had only ever been on the participant side of races, so it was really cool to see all the planning and preparation that goes into them. It’s a fairly small company, so they gave me a lot of responsibilities from the get-go. I did all of our social networking, in addition to coordinating volunteers and doing various other things for events. I had a lot of fun, learned tons about the sports business world and most importantly – my desire to pursue a sports business career was confirmed. My time at the company got extending, so I’m still interning in the office once a week during school until mid-October. So glad about this because, honestly, I’ll miss it when I’m done. 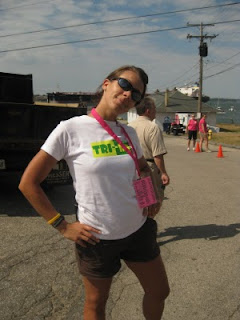