The Second One ... Maine Marathon

Ahhhhhh. Feels good to breathe a sigh of relief. Ran my second marathon today – Maine 26.2. I wanted under two hours, but most importantly I wanted a PR and I certainly got one – by, oh, 20 MINUTES! I’m very happy about this, especially since I know that my third will more than likely bring sub-four if the trend continues. I did swear to take a long break after today, but my friend Misty and I are already making plans for a half next month. She put it best, 'Stupid people think alike, right?'

I was nervous for this race, but not even close to the level 100 nervous-ness I experienced before Sugarloaf. Race morning Jaime and I drove up together and picked up Danielle on the way. Obviously, a marathon is not a marathon without some Danielle in the morning. Roles were a bit reversed this time around – Danielle struggled through training and didn’t want to run today, whereas I was pretty pumped. I should have asked her if she 'felt like P-Diddy.'

We ran into Misty before the race, so a RTB 2010 picture was a must. Van slumber party again? Let’s do it. 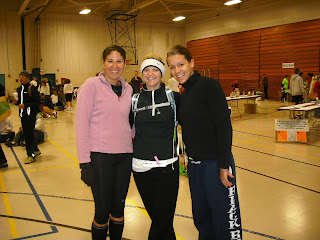 Three of my friends, who I know from work thouogh the friendship so goes far beyond, ran the half. This was actually Jaime’s first road race ever! She was so nervous, but I knew she could, so I totally non-violently forced her to go through with it. So proud of her!

Andy, Pauline and Jaime and I pre-race: 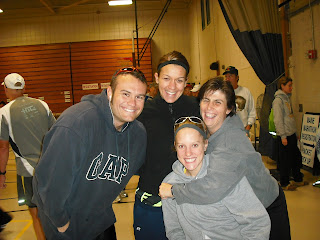 Seeing so many people I knew before the race totally put me at ease. I see them almost everyday working out, running races and they have become my fitness family. Also saw Colleen, Erin and Maureen (they ran the half as a training run for Marine Corps in a month) and are like my gym moms, always concerned with my injuries and listening to my complaining.

It was like 46 degrees or just above at the start and since we all know I’m a huge weather baby, I sported a throw away shirt. Totally didn’t throw it away though and gave it to Sarah at the first water stop. Also managed to pull it up high enough to show off the race number. (Fun fact: There has only been one race – road race or triathlon – that hasn’t had a four in it and I was pumped this had one, too.) 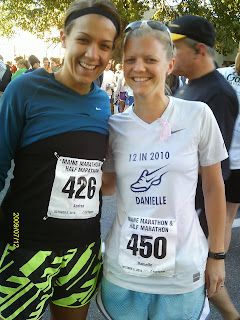 As for the actual race, here are the highlights. I started out running with Danielle which was awesome. (She is the one I credit with my marathon obsession, afterall, so I wanted to be there for her, even if just for a little bit.) I wish we could have run together longer but I totally lost her around mile 3. She might or might not have stopped to take a picture. Ya, I know, silly girl.

MILE 6.5 – All the half marathoners turned around. Danielle warned me about this and she was right – EVERYONE out there is doing the half. Needless to say the field depleted quite a bit.

MILE 10 – Met the long downhill that everyone was talking about. Couldn’t help but dread the run back up it at 16. Did see my family near the bottom, which was super fantastic.

MILE 16 – Met Mark. This was his second marathon in two days – he was one of the crazy people that did New Hampshire Saturday and Maine Sunday. Not to mention the fact that he ran an ultra last weekend (twice around Lake Tahoe) and has met Dean Karnazes a couple of times, so I was quite fascinated. We stuck together until Mile 20, talking about both our past and upcoming races. It was really great to have him with me, the time went so much faster and before I knew it I only had a 10K left. He yelled at me as I crossed the finish line and so here we are: 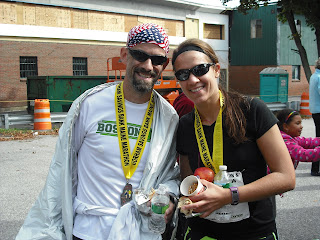 MILE 21 – Saw Misty waiting to run the last leg for her relay team. She gave me a big smile, a welcomed good-game butt slap and asked me an inappropriate question as she promised.

MILE 21.5 – Kevin rode up alongside me. He was biking along the course and hung with me for a mile or two. I first met Kevin through my internship – he’s one of our super race volunteers. Come to find out, he runs in the Maine Track Club and we have a ton of mutual friends. His first full marathon is Mount Desert Island in two weeks!

MILE 24 – Back onto Back Bay, very similar terrain for me. I could actually see the finish area from here and wasn’t too thrilled that it seemed so far away.

MILE 25.5 – MISTY!! She ran up alongside me and pretty much coached me to the end. I was totally at the I-want-to-cry-because-the-last-mile-is-one-too-many point so her being there was great.

MILE 26.2 – Funny story here, I actually ran into the half marathon finish on accident and had to hop over the barrier to finish the full. You try and hop a barrier after running 26.2 miles, not cool. Mom was right at the end, waiting for me to finish and a hug from her was all I wanted: 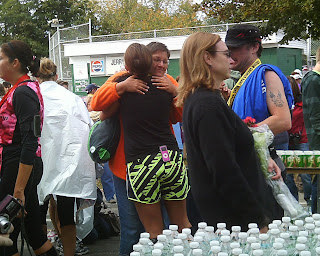 The family and I post-race. I wasn’t about to let this photo-op go again (totally missed it at Sugarloaf). 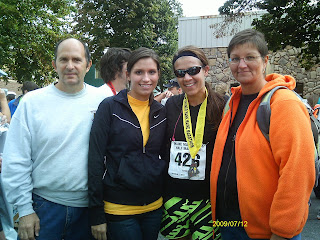 I’ve been joking with my sister’s boyfriend, Eric, about painting a giant ‘A’ on his chest for me. Instead, which I happen to think is so much better, he turned the ‘S’ in the Superman logo into an ‘A.’ Don’t tell anyone, but I think I’m starting to like this guy. 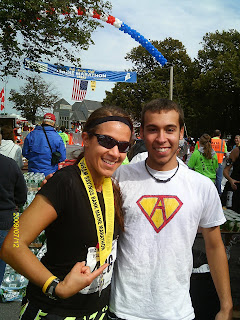 Many props to both my sister and Eric. They got up so early and were there throughout my race with my parents, escorted me to the food tent and to the porta potty, which as all runners know, says a lot.

Ran into another gym rat, Veronica. This was her first marathon and she totally rocked it! Along with Veronica came Jenn, Misty (again, must have been stalking me) and Lisa (I love these gym rats!) Here’s Veronica and I: 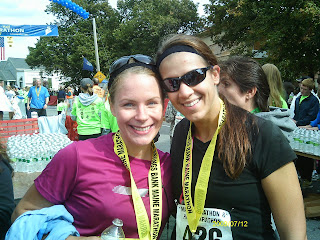 Couple of final thoughts and words of advice … always run a marathon with a handheld and have a great sister waiting on the side with refills (the whole hydration belt sucks during a race) ... wear Zensah compression sleeves (my legs feel great) … take a post-race ice bath (it was not pleasant, but I’ll be happy tomorrow) … seek out some sweet shorts because they really do make the outfit … hang out with friends the night before (keeps your mind off things and its good for the running soul, you know, just like pasta) … wear a black shirt if it’s cold out (it’s good camouflage).

All in all, a fantastic race. Definitely a keeper and a ‘you bet I’ll be there even if I have to fly’ for my 2011 race calendar. It’s pretty much like a long run only with people you know every couple of miles. Post race my mom told me that she never saw me without a smile on my face and my family saw me five times throughout! If that doesn’t sum up my day, I don’t know what does.

Just because my father did such a great job taking pictures, I have to include this one of Danielle and I. I was pumped to see her finish and I’m so proud of her! 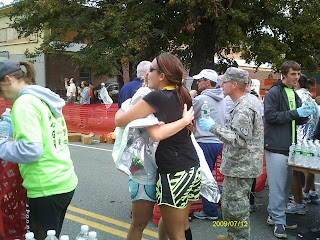